The connecting tunnel the powder magazine 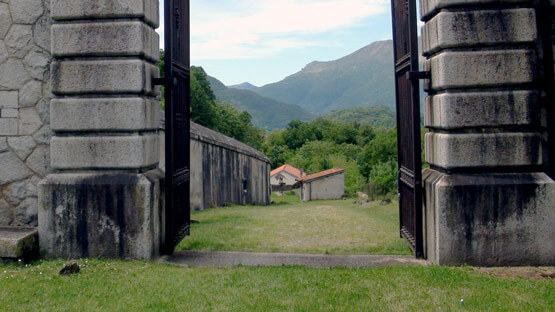 The 120-metre tunnel, armoured and well attached to the rock, connects the barracks to the armour-plated battery. Tubes containing electrical wiring run the length of the tunnel and the internal telephone line insulators can be seen as well as several flared loopholes armed with shell-proof steel shields, made especially for the close-range defence of the structure.

Halfway along the connecting tunnel, there is the entrance to the powder magazine. From here on, the tunnel floor is made from lean cement, smoothed perfectly for the transport of crates of explosive and ammunition. The tracks on the floor show that, originally, a narrow-gauge, Decauville-type railway was present. 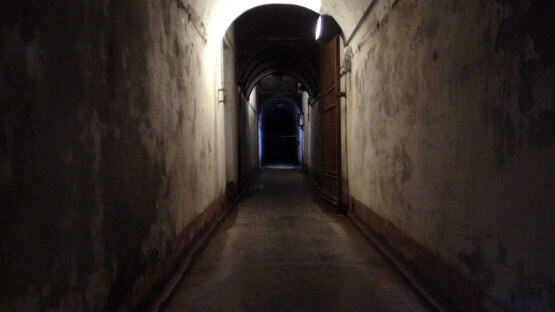 A 60-metre long corridor leads to several rooms dug deeply into the rock and which are equipped with particular security and dehumidification systems. Here the explosives which were used to charge the ammunition were stored, along with the powders which would have been used to mine tunnels and bridges in the Valtellina and Valchiavenna Valleys. 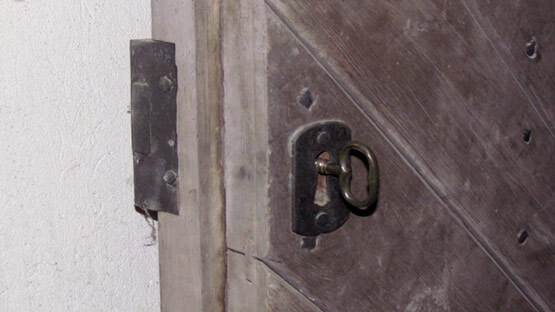 These two small rooms were used for the dangerous activity of charging the projectiles and the propelling charges. Among the safety measures, of note is the fact that the keyholes and hinges are made from copper, rather than steel, in order to avoid creating sparks. Furthermore, the rear walls of these rooms (which face outwards) are particularly thin (only 20 cm, compared to the more than a metre thickness of the Fort’s ordinary walls): in case of accidental explosion, these walls would have easily yielded, giving outlet to any destructive effect towards the outside of the Fort.