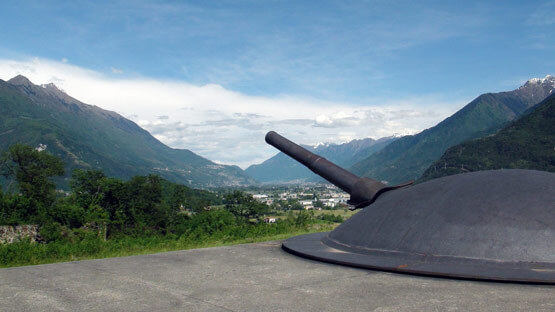 Forte Montecchio Nord was built in just a few months between 1912 and 1914 near to the beginning of the First World War. It is one of the greatest fortified structures on which the defence system complex of the “Northern Frontier towards Switzerland” pivots. It was thought up and built by the Kingdom of Italy as protection against a possible armed attack originating from Germany or Austria-Hungary via Switzerland

The system concentrates its structures in correspondence with the most important access routes to the Padana Plain: the Great St. Bernard Pass, the Simplon Pass, the Gotthard Pass, the Splugen Pass, the Maloja Pass, the Bernina Pass, the Stelvio Pass and the Tonale-Aprica route, all of which already had main roads and railway lines in place at the beginning of the 20th century.

Forte Montecchio Nord is strategically located at the point where five of these access routes meet and the control of this area was thus considered fundamental in preventing any possible military manoeuvre towards Milan.